Bob Rankin stated after the vote “that if this motion although good in principal had been carried it could have precluded North Staffordshire’s plans for the  setting-up of an eBay store to help raise funds for The Poppy Appeal”.

This year’s National Conference held at The Opera House Theatre Blackpool was a well attended affair with over 500 branch delegates from around the country and a number of overseas branch’s as well. Of particular interest to those in passing was a delegate from No.1 Post San Francisco Branch USA and Southern Spain in attendance. 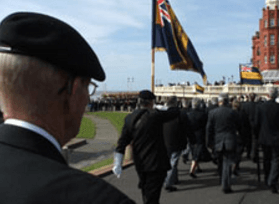 The Sunday session finished early to enable the Memorial Parade and Service to take place. 85 Legion standards took post and were paraded from  the Blackpool’s Winter Gardens down to The Princess Parade War Memorial. Service was given by The Right Reverend Nigel McCulloch National Chaplin The Royal British Legion. Despite the high winds and a mention of “Accession Week” the service went off without a hitch. Those taking part in the parade apart from Derek Bunting our County Standard Bearer and representing the County within the West Midlands Phalanx where; Andy James Branch Secretary and Delegate Rolleston on Dove Branch, George Godfrey Burton-upon-Trent Branch and Bob Rankin Newcastle & Chesterton Branch.

Martyn Tighe former North Staffordshire County Chairman and now National Board of  Trustees Member for the West Midlands spoke in support of Motion 9 and said:

“The Armed Forces Memorial is a government initiative put forward by Geoff Hoon when he was Secretary of State for Defence. The Trust set up as a result, has raised to date £1.2m of the £6m required to build and maintain the Memorial at the National Memorial Arboretum.

The Treasury has promised £1.5m from the sale of the Trafalgar 2005 commemorative coins. The Ministry of Defence has been pressed, by the Trust, to underwrite the balance of £33.3m so that contracts can be let and the Memorial completed by October 2007 for a Royal unveiling. The process to achieve this underwriting guarantee is underway.

Conference should consider supporting this Motion in order to put additional pressure on government to honour it’s pledges”. 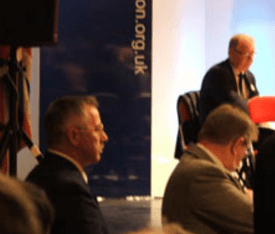 To finish off the proceedings The Director General Ian Townsend CBE, gave his last  report to conference as he will be retiring on the 31st August this year. On the serious side he talked of his successes during his 10 years “on his watch”. .. and on a lighter note, there was something mentioned regarding “about brothers and dead ringers”!!

As at the close of conference The Poppy Appeal 2005 stood at £24,556,279.18, a new record! “Well down everyone” said John Hawthornthwaite, The Royal British Legion’s National Chairman to conference.