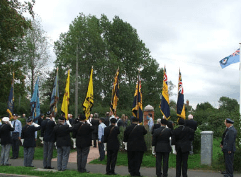 St Stephens’s church is home to the war graves of the Australian aircrew and one German Luftwaffe pilot who lost their lives in the Second World War.

Lichfield West Mercia Air Cadet Force provided the Guard of Honour and a good turn out of Legion Standards from both North and South Staffordshire, and local association standards.

After the main service and wreath laying there was another short service at the recently built RAF Memorial to commemorate all those who served at RAF Litchfield.